If you haven't had a chance to get out and ride or race over the past few weeks, then I appologize. My tales of dirt trechery and race mischief will probably only piss you off. I know, it sucks when life gets in the way and you can't get out and do what you want. But then again you are the chooser of what happens or doesn't so really, isn't it your fault you've missed out on all the fun?

It all started with the Lawrence River Trail Race. I really don't think you can find a fast trail to do a race on. Something like putting a rocket on the back of your bike, and pushing the boost button. Of course with one gear you're limited to the amount of fast fun you can have, but my 32x16 was still plenty of fun for me. Managed 1st of a pretty lame showing of singlespeeders. Not to say those who I raced where lame, at least they showed, but the amount of SS'ers was lame. Four total.

Fast forward to the next weekend and it was time for some Smithville lovin at Bone Bender. Not sure why they call it bone bender, as I'm pretty sure you can't bend bones, they only break. I guess it sounds cool. It was cool. Really fun fast trail with a bit of rocks and tech thrown in for fun. Even busted out the skinny skillz on the log ride at lap three. I had no ambition of racing for six hours so I went for the three hour solo SS. Did pretty well, and we actually had 11 racers in our class! Got first, to match Cam's and Travis's 1st, and Winkler's 1st. That dude has some serious problems. Anyone who can come in after six hours of racing only a few minutes behind the insanely fast duo of Cam and Trav, obviously has problems with being way too bad ass. He really needs to calm that down a notch. People are going to start assuming he's shooting dope through his toes and shit. 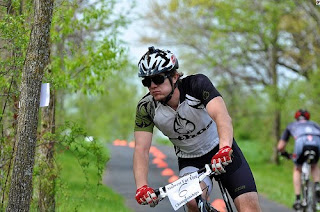 I guess the only pictures that were takin of me happened to be when I was stuffing my face with a cliff bar. That's what I'm good at though, stuffing my face. Some call me goose guts.


So that was fun... Then the rain finally put a damper on our parade of non stop dirt riding fun. Well it almost did.

I made the last minute desicion of gathering a few cats from the Burg and heading down to Neosho for the Tour De Tick race. I haven't done that race in a few years, and the rain was killing all hopes of riding around here, so the three hour drive was worth it.

The race was cool. I did a pre 6 mile lap which I shouldn't have done. Felt great but burned more energy than I should have on a warm up. Took the lead from the git go, which was odd considering I was the only one with one gear. Held on great for a bit, was feeling like superman, until I had two fumbles back to back on a tech section. Lost five postitions and blew my heartrate up. Took forever to recover, but managed to work myself back to 3rd when Dan and Shot had simultanious flats. Oh the luck... Then worked into 2nd after taking over Little Arky on a hill. Eventually got pasted by Shot, who then later had another flat. Then pasted by Dan, then Little Arky, and lastly another racer. The last lap and a half reduced me to the likes of a 16 year old little girl. I didn't have the power to dominate the climbs and I was losing it fast. Still managed to get 7th of 14 overall experts. Not bad for a C race. I learned some shit which is worth something right?

The funniest part of the day happened at the start of the kids race. We were just getting suited up when we heard a girl start screaming at the top of her lungs and crying like a rabbit attacked by a pack of wolves. She was screaming for help and we could only imagine the worst. Three of us bolted through the thick brush to come to her aid. Turns out she was SOOOO upset that she was going to lose, and she wasn't winning that she figured crying and screaming would fix the problem. That girls dad might want to have a heart to heart talk... It's not about winning kiddo, but if you act like that again, you're banned for life!

So that's the latest skinny. I've been riding and working alot, Cam is moving to Colorado, I still haven't found any mushrooms which might be due to the lack of looking, and the rain can officialy go fuck off.

Wanna race bikes this weekend? Be at Wilson Lake. It's where all the cool kids will be.
Posted by Garet Steinmetz AKA G-Wiz at 10:12 AM No comments:

If this doesn't get your pecker hard for some racing tommorow, nothing will. So much has been going on, just haven't had time to post. For now, enjoy this piece of amazing riding. Makes me oh so gitty...

Posted by Garet Steinmetz AKA G-Wiz at 10:54 AM No comments: