If there's one thing I remember from my childhood it's the sounds of AC/DC blasting from my Pop's car stereo as we jammed to the likes of "Hells Bells", "Back in Black", "Thunderstruck" and more. I decided to make Back in Black my theme song last week as I plotted my redemtion on crap legs and bad races for the last month. I was ready to feel good again. Ready to pound pedals like I knew what I was doing instead of finding myself laid over on the side of the trail watching the race go by.

I did some pretty intense recovery workout last week. This consisted of little riding, lots of massage, foam rolling, no drinking beer, drinking 150+ ounces of water a day, good nutrition, lots of pills, and even some EMS. Apparently my roomate thought I was crazy when I whipped out the electric magnetic stimulator machine. Ever seen one? You place electrode patches on the muscles and it contracts the muscles through electrical current.

Anyways I overdid that part a bit, and instead of doing a recovery session of 1-3 magnatude contractions, I did 6-8. My legs were sore as hell on Saturday, and slightly better on Sunday. I didn't care though, I felt great.

Knob Noster got a little rain on Saturday night, but really didn't matter. The trail was good, minus the exits of a few creeks, and the new section that was a bit boggy.

Good to see some KC folks down to race. I've been talking that race up all year, and some of the guys I expected didn't so, but some I didn't did. We only had 4 total experts, and I was the only Open guy. After trying to sneak into the 35+, I was rejected but we did all start at the same time.

I laid down the patented G-wiz start, and took to the singletrack first. I slowed down on the new section to get a nice recovery in and once we hit the classic track, I let my knowiness of the trail and fresh legs take to it. Luckily Barry reduced the race from 4 laps to 3, which was nice for me due to the climbs and my one gear.

That was the last I saw of the other guys. I rode my race clean minus one over the bar ride. It was on the only rocky climb and I came in way too hot the first lap. No biggie though, I was back on and riding fast shortly after.

I did everything well yesterday. My legs were spinning fast, they climbed well, and they held a nice pace. I came in at 1:40 with Doug Stone at 1:48, Todd Fridley at 1:50 something and Mitch a while after that with some flats.

Steve came down which I didn't expect. Always good to see that cat's mug. He did well, and while he couldn't quite beat Gary Lowden in his age group, he did beat all but 2 of the 40-49 year old Cat 2's.

Here's the money shot. I need to teach Steve how to properly take photos. It's not a photo unless you flash a crazy face. 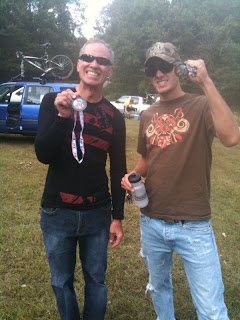 My legs are back on... I'm going to race Warsaw this weekend. Apparently no one has been consistant in the MWFTS and with a finish at Warsaw, I'll have that Open Expert overall series wrapped up. Two series wins in one season... Not to shabby abby.

Here's to not racing cross yet!

G
Posted by Garet Steinmetz AKA G-Wiz at 10:46 AM No comments:

That's about the extent of my thoughts on the Swope race last weekend. This picture pretty much sums it up. 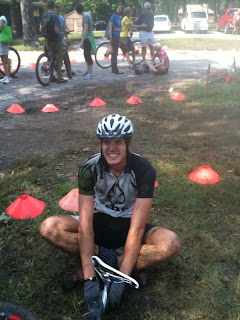 Riding strong, sitting 4th, pass third taking the hard line down Jawbreaker, riding behind Trav and Aaron comfortably, then I take a hard hit to the saddle, and it takes and ass dive. Try to fix it, and the craptastic bolt, and my fumbleness ended up stripping the bolt. Then it was two and a half laps of dealing with a seat that nosedived, then ass dived, then stayed center for a few minutes then did more diving. I choose to just take it easy and have fun.

I won the 19-29 Cat 1 race tho! Seacat DNF'd after the first lap because of flats. I officialy took the overall series win also. So did Travis. That's what Ethos does.

KNOB THIS WEEKEND! Fuck all you crossers... Tossers. Can't you just wait till its gets somewhat cool? Manions does sound super fun though, and had I already not told everyone I'll be at Knob, I'd so be going after that sweet Chrome jersey for the SS winner.

G
Posted by Garet Steinmetz AKA G-Wiz at 6:21 PM 2 comments:

Saw these on an ol' boys bike a couple of weeks ago and loved the look. Flat black thru and thru. Turns out he was selling them, and I picked them up for a swift two bills. 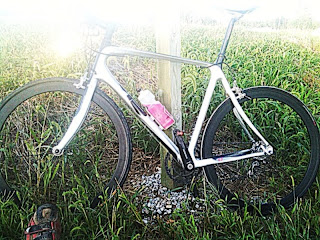 Nothing special, just a heavy ass set of wheels to train on this winter. Ultegra hubs laced to Velocity B43 rims. No braking surface makes for a clean look and the rival brakes still hook up nicely. Something like over 2000 grams. They hold speed very nicely on decents and flats, but you sure can feel them on the hills...

Getting ready for KC Cup. Legs still don't like me, but I'm about to beat them into submission tonight at Swope.

Try this one on for size... Local area band. Cowboy Indian Bear, "Heart Be"

G
Posted by Garet Steinmetz AKA G-Wiz at 9:52 AM No comments:

The Good, The Bad, The Fugly

Sometimes you just have to realize you have nothing to complain about, and no matter how shitty some things go, they are very trivial in the whole grand scheme of things. I'd like to bitch about last weekends race, and how I was sick coming into it, and how it wasn't suited for a SS or certainly not rigid, or how I knew it was going to suck from the git go, but I won't. In the words of the great Bob Saget, "You ever suck dick for weed man?" No man, I haven't, so therefore I really don't have shit to complain about. (for those who find that statement offensive, whatever, it's one of his greatest lines, compliments of Half Baked)

So the Good... Binder Tall Oaks Challenge rocked. Awesome weather, awesome trail conditions, and lots of good fun. Six of us Ethos folks came to conquer, and Travis and I took it to the house with the overall duo win. I even managed to pull out fastest lap, making for a nice paycheck overall, and a great feeling of my fitness. I was absolutely crushing the SS. Big thanks to Nick and ya'll for continuing to put on awesome races... 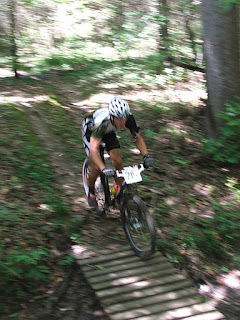 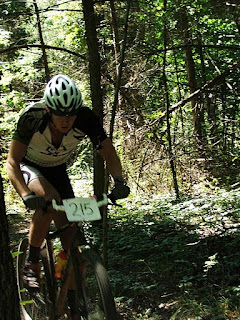 I beginning to think I rarely ever look up during a race.

Last weekend four of us drove for what seemed like forever to Tour De Lizard. Don't miss that shit next year, it's crazy awesome! I'll be bringing gears and a dually next year for sure though. It went horribly wrong for me, but Trav did put it down for Ethos, taking 1st in his age group and 3rd overall. 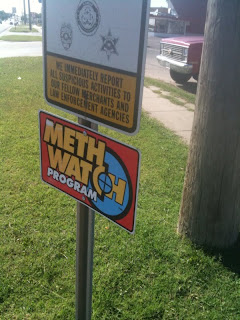 I haven't even seen these in Missouri yet... Crazy Kansans!

Not sure what's been in my system this last month or so, but when it strikes, it strikes hard. I've been downing tabs of Eldeberry like crazy and it's taken effect for sure. Some good ol' rest and recovery, some extreme parenting for prep, maybe even some crawbling, and I should be ready to come put it down for the KC Cup.

Someone told me it's my kind of course....

G
Posted by Garet Steinmetz AKA G-Wiz at 10:04 AM No comments: