So last weekend ended up not going exactly as planned.  Originally we were to blast up north to hit up the Nebraska season opener at Swanson.  I raced there a couple years ago and had a blast.  Unfortunately there was just enough rain chance, and no rain or shine we go no matter what policy.  I don't blame Ryan for that last part whatsoever, but the 6 hour round trip drive was a bit much to swallow had it actually been cancelled.  So therefore we opted to go support Mac and hit up his Feel the Burn endurance race down in Warsaw.

I never mind going to support Mac.  That dude is the best promoter in the area, but yet always seems to draw the lowest numbers.  That really should change, his races are always spot on.  This race didn't excite me much though, being the whole 52 mile part.  I haven't ridden that long since the BT Epic back in October.  I've been working on the fast part lately, not so much the long part.  It was going to be interesting.

We made the decision to head south in the parking lot at 8 in the morning.  Fast forward a few hours and we made it to Warsaw with about 30 minutes till the start.  I had absolutely nothing packed for an endurance race, so had to resort to piecing together a bunch of random nutrition from any source I could find.  In the end it didn't really work to well....

Race goes off and Micah goes to the front and then proceeds to piss off Drew Edsall on the first climb, which in turn had me cracking up, and turned our pace into a crawl up the first hill.  Drew tears off the front, and I keep in mind that I'm likely not anywhere near on his level of endurance at the moment.  So with that being said I regulate myself to the back of Dan Millers wheel, and we make our way past Micah and on down the trail.  Our pace was very laid back and conversational which was good, but I felt I was missing some free speed by holding Dan's wheel so I eventually made my way past.  I then proceeded to get a gap, then loose it to a dropped chain by a bad shift in a weird corner.  I got it fixed but it took awhile and Dan and Micah had made their way back up to me.  I put in the only hard dig of the day and got out of sight and continued to stay steady.

The race was fun, but honestly really boring.  I'm not a fan of no mans land, especially in an endurance
mountain bike race.  Drew had a good gap, and I had a good gap on JP who made his way to 3rd overall.  I made it through the first two laps fine, had a few minor cramps in lap 3 and had some major cramps in lap 4.  In the end I finished 2nd overall, 1st in age group.  Drew finished 22 minutes ahead of me, most of it coming from my horribly slow last lap.  I think I had about 10 minutes on JP with a finishing time of 4:16.  Plenty fast enough to make me happy. 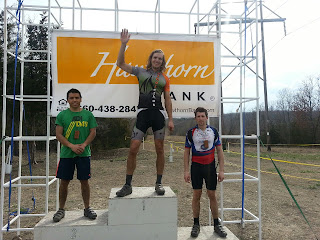 They ended up racing up north, and I was kinda bummed about not making it.  It would have been fun to race those boys, and the legs were feeling good on the day.  Oh well, maybe next time...

Thanks again to Mac and his crew.  As always you pulled out all the stops and made it worth the trip.  The bunny man, guitar hero, and rocks all made for a crazy and hard day in the saddle and my legs are very much still feeling it.

I'm probably out on Bonebender this weekend.  I have Sea Otter coming up the next weekend, and with last weekends thrashing of the legs I need some time to get them back into fighting shape.  I honestly shouldn't have probably wrecked them so bad, but when you're in the heat of the moment you do what you've got to do.  It'll all be worth it in a few days when they loosen back up and I can hammer on them again.

A few more days of high intensity, some rest, and then the flight out West to hammer with the best.  I'm ready...

G
Posted by Garet Steinmetz AKA G-Wiz at 2:51 PM No comments: