It was staged at the base of a fairly legit mountain, and it was done up big. Not a most dominating, intemidating type of mountain, but one that you knew was going to test your might regardless. Coming from the flat fields of corns and beans meant that I wasn't supposed to do well. Already knowing you have elements going against you will sometimes play hell with your mind, or it will cause you to have no worries, no expectations at all.

I knew I had things going against me, and I had some doubts, but I choose not to let it bother me, and that ended up being much better in the end.

Trav and I flew from KC to Salt Lake, to then Boise, Idaho on Thursday. JP Brockett and KRocket picked us up, and we made the short 2 hour drive to Sun Valley. I have to give a big thank you to them for not only doing that, but then also driving us back to Boise last night so we could fly out this morning.

After arrival Thursday afternoon, we built up bikes and headed down to the venue. We ended up doing a complete lap Thursday, which wasn't on my list of crap I wanted to do Thursday. I was still trying to find my legs after Wednesday nights Spin! Pizza Ride, and the flight that morning. That and I like to take it easy two days before a race, and then open the day before.

That first lap was eye opening. It was a very up and down course. You go up, and then you come down. The climb could be segmented into three seperate sections. The first was the more loose, more steep pitches. It was tough, and a couple of good roots really threw a wrench into the rythm. I hiked a bike a few sections, and then hit the second section. This was less steep, and more open and smooth. Although it sounds sweet, it was still at a good pitch, and you were still redlined from the section prior. Then you popped out into the open, did a hike a bike switchback, and ended up at section three. This last section was a fire road that snaked it's way to the very tip top of the mountain. It was long, steep at times, and very tedious.

But my oh my, when you reached the top, it was all grins and wa-hoos from there!

A fast fireroad decent drops you into the singletrack, were you switchbacked your way down the moutain, over whoop-de-doos, blind bench cut corners, and overall loose, dusty, heaven. Down at the bottom, it was sprint through the start/finish, up the road, over the big fly over, and through this rock section before climbing back up the mountain. 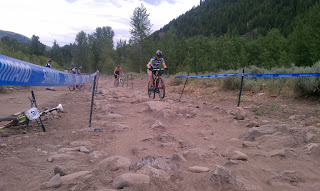 It was a great ride, and I sure as hell didn't do it Friday. I was a bit sore waking up Friday morning, and besides watching KRocket get 4th in her group, and doing a couple of prologue loops, I took it easy.

The prologue lap started our race on Sunday. It was a short lap that included a very steep, not long but long enough climb to get you deep into the pain cave. It was here that I was first slapped in the face with the pain fist of US Nats 2011.

4AM on Saturday morning rolled by awefully quick.

Three hours later and I was sitting second line at the start of what would become a very fun but tough race.

It wasn't that fast of a start at the beginning of our 7:30AM start. But damn, it sure did get hard once we hit that very first climb. I sure didn't have it. I couldn't push any harder, and right off the start I was sitting 10th or so of 17 riders in my group.

We quickly re-grouped after the rock garden, but it soon broke loose again once we started the climb proper. It was a rough go of it for a bit. A lot of hike a biking, heavy breathing, and "Come Ons"! I knew that was going to happen. I knew I should have been in the very front. I knew, I knew, I knew.

But alas, sometimes what you know, and what you can truely do aren't neccassarily the same things. I should have had a better start, but I didn't, and from there on I resolved to start the pick off process.

The climb opend up after section one, and it was there that the real riding hit, and I could start picking off guys. This was also where the leaders of the next few classes started working their way up. Once one would catch me, I'd slide over, and catch his wheel. I did a pretty good job holding wheels, and made my way to the top of the mountain feeling fairly well.

Once the downhill hit, I was ready for the fun break ahead. Problem was I was sitting 5th wheel or so in a group of riders and the dust was so bad you couldn't see anything in front of you. Now that's not usually a great idea when you're flying down the side of a mountain at 18+mph. One bad mistake and you could find yourself in trouble fairly quickly.

I kept the group within site, but still got caught by a couple of riders on the way down. One would be the eventual 4th place finisher from my race. It was amazing how well some of these guys decended compared to me. I made note of that area of riding that I obviously could do better in. We just don't get the luxury of those long downhills around here, and it seems like anytime you get one riding, you want to enjoy it rather than fly down as fast as possible. Make no mistake though, it was a true race to the bottom.

Things were much more open and interesting on the second lap. I had the rider in my group in sites, with a older group rider between he and I. I kept on their wheels, and managed my way through the first part of the climb for the second time. I still had to hike a bike a bit of it, but I never stopped advancing, and before I knew it, I was on the wheel of my age group rider.

I passed him on the more open smooth section, and laid down the wood to get a good gap that I hoped would stick through the downhill and through the finish. The gap worked, but holding it didn't. I dug deep and kept the heart rate pegged at what I at the moment percieved to be the highest I could sustain.

You see, I haven't used a heart rate monitor in over a year or so. I just figure I need to go as hard as I can no matter what. Well that usually works, and if I blow up here in Missouri, I can quickly recover. Not up there. You blow up and it takes much longer to recover. At this point of the climb, we were at around 7000 feet of elevation. There isn't a much oxygen up there, so you find this happy median of going as fast as you can, without crossing the line that blows you up in spectacular fashion resulting in a epic fail.

I held that line at what I thought was the best possible. I climbed well. Really well for not ever getting to climb sustained climbs like that. Towards the top, I saw another rider in my group, and decided to push it even harder to try to overtake him before the crest. About the time that I did that, he caught wind and laid down his own attack, holding me off.

Shit was the first word that came to mind. At this point, I had no idea what postition I was in, but I knew that I just let one slip by, and that could have been the difference between a podium and not.

So the decent began, and it wasn't long and I noticed some riders behind me. Turns out the first two were from an older group. The third however was from my group, the rider who I passed on a climb. I asked what group he was in, and he replied that he was in my group. I then kindly told him he was going to have to work for it then.

Work he did, as he pulled a very slick pass on one of the last switchbacks. He took the tougher inside line, as I muscled my big wheeled bike around the slightly easier outside line. It was a smooth move, very smart indeed. I quickly jumped his wheel until he brought me to the other rider in our group who was in front of us. He quickly passed the rider, and then I followed with a pass on the second to last switchback just like I was passed just earlier. I was pretty impressed with myself. It was the move of the day, and the move that would allow me to bust my way down to the bottom in 5th place for the day.

Crossing the finish line was relieving. An instant weight had been lifted from my back. All the years work finally came to a head, and I had done everything I felt I could. I had a great race, and felt like regardless I did well for myself. I sat back, smiled, and waited for my my teamates JP and Trav to finish.

It wasn't unitl another hour or so until I got to see the final results. 5th place gave me the last spot on the podium. A minute and a half off second, and 6 minutes off our age group winner, and overall winner.

I was pleasantly disapointed. I will always be my biggest critic. But at that moment it was what it was. I had did well, and the beer was calling my name. It was a beautiful day, and with the Pro racing action to follow, nothing could have taken away from the awesome day that it was.

But I could have had that minute and a half. I should have, but you know how that goes in racing.

It's all gravy baby, things could have always been worse, and all in all it ended up being a most excellent adventure.

I have give a couple of shout outs to my sponsors and my team for helping me go out and chase my dream on the side of that mountain. I also have to give a big thanks to Travis from BikeSource for helping me get my new rear derailleur put on Wednesday afternoon. They always do me well, and take major care of their racers. Definently glad to have all those people on my side, because without them I wouldn't be able to do what I do.

As for now, party on Wayne... Party on Garth. 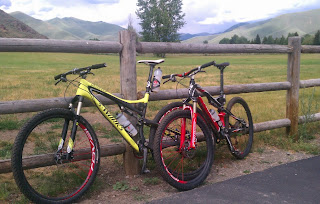 A couple of sweet bikes in front of a sweet view. 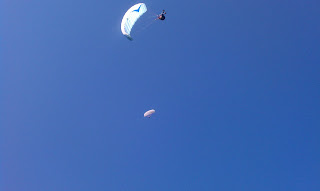 These dudes were dropping in all weekend. 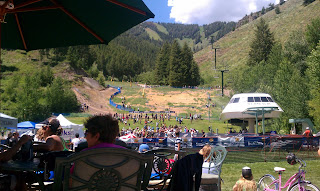 My view for most of the day Saturday. 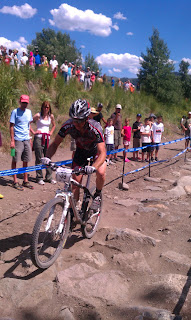 Our boy Aaron from the cornfields to thr Pro field!
Posted by Garet Steinmetz AKA G-Wiz at 7:17 PM