First month of  "base" time is down.  I feel real good about how it went too. It's amazing how fast 3 and 4 week blocks of training go.  I'm pretty sure ever since I've been serious about training my life as an athlete has been broken up into the blocks of working out.  It always seemed natural and logical to take a progressive approach to it by breaking your body down differently depending on the time of year, then taking a short break to let it heal back up.  Break it down, build it up, rinse and repeat.

So the winter season for me this year runs Nov-Dec-Jan.  Three months of nothing too scheduled, but still maintaining a good overall fitness and working on a few key areas like my nagging back.  It's always been an issue for me.  I think riding the Stumpy a bunch lately while taking a ton more hits hasn't helped.  But man it's so fun.

So one of the three months is over, now to just keep it going when the going gets the roughest.  December and January can be real hard months for cyclists. We have it hit and miss around here.  You might get lucky and it's nice enough that you can skate through the winter blues just fine like last year, or you could be a little more unlucky and catch a shit winter like we've had not just a few years ago.  Those are the worst.  Motivation to get outside and ride only seems to rear it's head so often when the weather is never truly nice.

Lately though that sure hasn't been an issue.  We've been dealing with another mild time so far, and as far as I'm concerned I hope it stays that way.  I used to hope for rough winters back before I started racing more regionally.  In a sadistic way I saw it as a chance to get a leg up on my competitors because I knew I would ride no matter what, but a lot of people wouldn't.  Same goes for the heat of summer.  If you can continue to ride and get strong when our weather turns not so favorable, you have a much better chance of success at the next race gathering.  Now I find myself hoping for mild winters.  It's easier on me, and most Pro athlete's I race against don't slow down a bit in the winter so there's not a big chance that I'm getting a leg up on them regardless of weather.

I did the little race at my old stomping grounds last Sunday.  Knob Noster state park just East of Warrensburg is a pretty cool little trail.  Working in Sedalia, and living in Warrensburg meant that this was the trail I spent most of my time on for what was close to 4 years.  It's not a very technical trail, but it's wicked fast, flowy, fun, and best of all hilly.  I used to ride my SS out there 2-3 times a week pushing big gears up those steep hills.  Last weekend I got to ride laps on both the StumpyFSR and the Epic.  The Epic was way faster.

Lance and his company of awesome volunteers really made for a fun day on the trails.  We had perfect weather with 70 degree temps, on the second of December.  That's always a good day.  The volunteers posted up at every intersection and were always clapping and cheering on.  It was a really great job on their part putting on their first race.  It was good to see some new faces, and a lot of people had said it was their first time racing.  The course was even better than I could have imagined with the addition of the  Meat and Potatoes climb. Or at least that's what we used to call it.  It's a fun little monster of a climb.

Monday I got lucky enough to sneak a few laps in at Binder.  That place still is a ton of fun.  I hope we get to race Lakeside some day.

Tuesday I ended up riding Rockbridge in Columbia with what was probably the best dirt conditions I've got to ride in awhile.  It had rained the night before making the forest dirt grip like glue.  Velcro dirt, hero dirt, whatever you want to call it, it was stellar.

Now I need rest.  I've pushed it pretty far for the first month, but all system checks are a go.  Time to take a little time away, and then get back at it next week.

And to Shoff, you better not forgot about the 17th and 18th.  The Stumpy has been begging to get down to Bentonville. 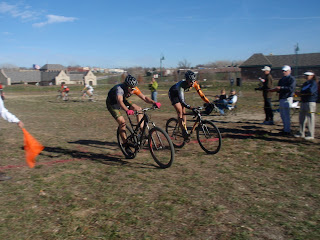 A.Keck shot this picture of the cross race a couple weekends ago.  Fat tires vs. Skinnies.

Looks like the weather won't stay this great for long.  Get out and enjoy it!

Posted by Garet Steinmetz AKA G-Wiz at 7:39 AM 1 comment: