3...2...1... GO! Sprint up the hill, take the lead and begin to wonder what the hell I was doing. Most of you know how I ride wet rocks. Kind of like trying to drive square pegs in round holes. It's almost impossible. So it became apparent not long after hitting the singletrack that I shouldn't be leading. I was sliding, and skipping my bike and body all over the place. Somewhere in the mix, I sent my bike into a tree and told Aaron that it was time for me to take second wheel. He quickly took off, and I busted tail to keep up.

I'll also go on record saying that it wasn't just my bad luck that day that lead to me pulling out of the race. Hitting Phase 4 during the first lap, I noticed that my body wasn't doing well. I was having an off day, and I was wasting way to much energy for as slow as I was going. Not sure what the deal was but my HR was sky high, and I felt like I was creeping along.

Aaron came in a minute ahead of me after the first lap, and at that point Travis was just behind me by 30 seconds or so. Not long into the second lap I took a hard over the bars, and sent my bike end over end on one of the armored creek crossings. I was pretty pissed at this point, as I always get when it comes to me and wet rocks. Travis passed me just like he did at State this year, and I'm pretty sure I said the same thing I did back then. He asked if I was ok, and I replied it was just another great fucking day riding! I was pretty tired of my rear tire sliding all over the place, and seeing a big galge/crack/whatever it is on the rear end of my bike didn't make matters any better. 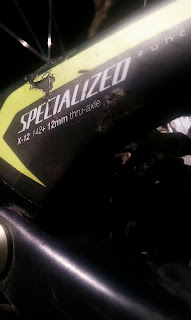 The crack in question... More on this to come.

The rest of the race was pretty much a joke. I started riding a bit better, mainly because I slowed way down on the rocks, but my luck never got better. I had my first flat on lap two, fixed it on the trail, and then had to stop at our pit to air up and get more tube/air supplies. Coming into lap 3, I was down by 10 minutes on Aaron, with 3rd being a few minutes behind me, and a pretty huge gap over the rest of the field. I figured I'd just play it safe, ride slow and smart, and try to finish at least 4 laps. Lap three was rough to start, and I even had to take a quick breather. Mark G asked what the hell was wrong, and I told him I was being a Sally. I started to feel better, but in the mist of flossing 8 pins, I caught flat number two. Not only did that suck, but my hands and jersey was so wet and slick that I couldn't get my small 16 ounce air canister properly installed on my inflater head, and lost pretty much all of the air that was in the canister. Not to mention the inflater head was acting up, and kept jamming up on me.

Oh well, I was done at that point. No air, no more tubes, and tired of dealing with everything. I hiked my bike out, and called it a day. It was a pretty damn long hike out too...

I left early due to not feeling the greatest, and wanting to get home to rest and get my bike for the next day dialed in. I wanted to stay and party, but the SS Championships were the next day, and I wanted to do well at it more than I did at Spoke Poney so it made sense to jet out early to get ready for round 2.

I was pretty beat up, not really from the race, but more from the wrecking. I decided to go out for another hour ride with some friends later in the afternoon, not only to get a sense of what I needed to do with Kevins bike to get it race ready, but also to get some blood flowing through my beat up legs.

After some major changes to Kevins bike, I was happy with how it felt, and felt good about racing it the next day. I wanted to race my SS, but it's in pretty rough shape right now. It needs a new rear wheel, but more importantly it needs a new tensioner. I have it magic geared at 32x18 which is a great gear, but the chain was a little loose and I didn't feel like risking dropped chains all race long.

I woke up at the crack of dawn again on Sunday, and made the hour trip down to Warsaw for what I expected was a 9am start time. Turns out they moved it back to 10, which sucked because I had to waste more time, and that time would have been nicely spent sleeping in a bit more.

Warming up I knew I was feeling a little rough, but my HR was steady and felt better than the day prior. I did a little warm up, and eventually lined up with the 20 or so other single speeders that came out to fight for the title of SS Champ. It was actually pretty disappointing to see such a small turnout, but at least there were some pretty decent riders who showed up. Turbo from Jeff who took 2nd last year, beating me on my rough day, the other Jeff crew, Dan Furhman, some Springfield boys, some Seagal boys, some Colorado dudes, and a few other randoms who could always turn out to be fast.

We took off up the long wide open double track, and to my suprise, I was able to keep my 32x18 up front until the end when Dan took the lead. He was running something like a 33x17 which was ridiculous. I knew that if he could turn that gear well all race, he would win, but it was a tough course and turning that hard of a gear wasn't going to be easy.

I rode behind Dan until I noticed Turbo working his way up, and about halfway through lap 1 of 3, I took off and for the most part never looked back. I was getting time splits from the Lake boys, and it was never enough to rest easy and spin lazily. I had to pretty much ride fast the whole time, knowing that second was only a few minutes back.

I rode well, and just tried to ride smart and not flat. Flats come easy at Warsaw, but I was running some pretty stout tires. I didn't even take a tube or air with me. I just figured flatting wasn't an option. Sometimes it's best to think it into reality.

I won in the end, with a time of 2 hours and 11 minutes. Turbo put on another impressive SS show, only coming in a minute or so behind me. He had a strong last lap, but I wasn't about to let another SS Championship slip through my hands. I pinned it in the last section, and came across the line in the only position I was after, 1st.

All in all, Mac did a good job of puttin on the SS race. The course was about as good as it could have been, and he kept the price at a nice cool 10 bucks. More racers would have been better, but looking at this year vs last, the competition was about the same. Maybe a few less heavy hitters, but it made winning still worth it.

Aaron finally sent me pics from Nationals. His gal is quite impressive behind the lens of a camera. Here's some for your viewing pleasure. 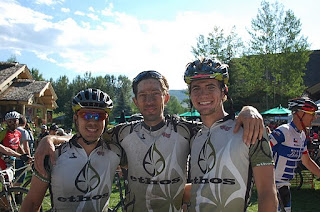 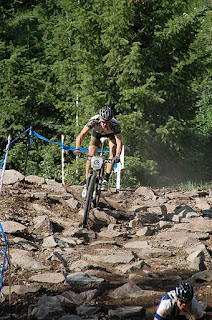 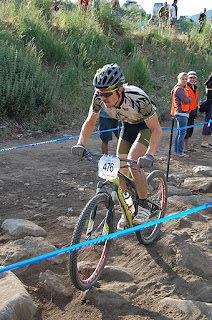 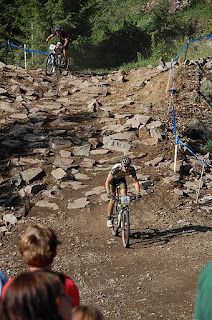 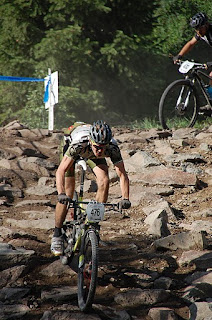 Spin Pizza ride tonight, followed directly by a night ride with Burnsey and some others! Oh ya, good times are sure to be had...

Posted by Garet Steinmetz AKA G-Wiz at 10:02 AM