The Crazzyness that was... Burnin

I'm not sure what was happening on the crosser scene this weekend, but I can almost certainly guarantee it was nothing even close to the awesomeness that was Burnin. The stories of this race have tempted me for years. I knew the course, Council Bluffs, but I had no idea of the spectical that was to be Burning at the Bluffs VIII.

The story of the 2011 edition started with a little West and East collabo. It was to involve my go to guy Travis Donn, and our buddy and normally duo foe Chris Ploch. Trav asked me about a month ago if I wanted to do a three man team with him and Chris and it took all of two milliseconds for me to answer. Hell ya, there was no way I was passing up that opportunity.

So Friday mid-day we began what would become the Cannonball run down to Council Bluffs lake. We were followed by our new teammate, and eventual destoryer of the 6 hour solo race, Jason Knight. This dude has some serious potential taking not only the Binder 6 hour win for his first mountain bike race, but also the 6 hour Burnin. One thing I don't think he was ready for was following Travis on the winding and long trip down to the race venue. It was roughly 4 hours from my home, and a good 2 of those 4 hours were on some backcountry, fun, twisty roads. Travis drives a Subaru WRX Sti, and he isn't afraid to drive it. Jason on the other hand drives a Honda Pilot, and it sure got it's ass worked on the trip down. I wanted to kiss the ground when we finally arrived at the beach roughly around 6pm.

We donned lights, and took off on a half day, half night lap around the 13 mile course. It was an awesome evening for riding with perfect temps, a perfect trail, and tight backs from 4 hours of being couped up in the car stressing for my life most of the way. All in all it was a great way to shake out the legs.

The night was filled with hanging around the campsite with our gracious host, a bunch of DRJ dirt rippers. We race against these dudes from time to time throughout the year, and they always seem to be a good time to hang around. This weekend was no different. Shottler, Mike Best, and Nate Means, (defending Wicked Fast champs) even came over to hang for a bit. We did our best to joke around with them and hopefully get in their heads a little bit. We all knew we were in for a battle of epic status come 9am the next morning. The nerves were high, and even though we all were laughing and having a holly jolly good time, it was evident that everyone was secretly serious about the following day. The buckles were on the mind...

As I laid down in the tent that night I couldn't help but notice my own nervous engergy. I felt like I had just downed seven Red Bulls, and direct injected pure adrenaline from a pure bred racing horse into my veins. My heartrate was something like 90 even after trying as hard as I might to calm the system. Somewhat worrying, I slipped into the darkness of the back of my eyelids, and had dreams of flooding rains, and crazy racing scenarios. It was truely a wild evening of dreaming, waking up randomly to the loud winds, and the even louder thuds of acorns on cars.

Waking up is always rough for me when camping on the ground. I'm a hotel kind of guy the night before a race. I like taking a shower after a pre-ride, and even better, sleeping on an actual bed. That wasn't in the cards for this weekend, so I made due with it the best I could.

After the long wait to get our timing chips, and calfs marked, it was time to send Chris off for the first lap of the day, and the start of the 12 hour race. The order was Chris, then me, then Travis. Chris was racing Nate, I was to do my best to hold Shot, and Travis had Best.

Chris had a good run, and even better lap, putting in his first sub 1 hour lap. I quickly took off, and within the first few minutes of riding the track realized it was a much tougher trail when you're trying to push it. I was shooting for the fastest lap, so I was pushing limits, and blowing up the heartrate. Luckily I was able to do so even after the worrying about the higher than usual heartrate all the night prior, and even throughout the morning. I did however feel like dogshit on each of the major climbs. I was foaming from the mouth, and feeling like a massive self implosion wasn't far away with each crest of said hills. Luckily I still finished fairly strong and managed to put in a 59:37. Goal one met, the sub 1 hour.

Trav put in a solid first lap at 1:01, and could have easily put in a sub 1 had he pushed just a bit harder. He's a bit smarter than me though, and has experience on these kind of events. He chooses not to blow himself up. I on the other hand blow up first, and try to manage the damage later. Young and dumb they call it.

Chris put in a solid second lap, and I followed up with a 1:01. Trav stayed steady, Chris did the same, and I put in a 1:03 for my third lap. At this time we were up by only 15 minutes, with four laps to go. Team Testes, or whatever those COMO boys called themselves, were proving to be worthy opponents. They weren't giving up, and they were on pace to easily beat their last years time. We however were on pace to do what has never been done in Burning history, 12 laps. A quick calculation showed we could do 1:10's and still hit 12 laps. Knowing this, and also the fact that one bad lap could spell doom in the form of losing 1st place, we all told ourself's to stay steady. That was to be the story of the day.

Chris had the twighlight lap, and still put in a good 1:07. It was my turn to go out on my last lap, the teams second to last. Not only was this my first 12 hour race ever, but this was to be the first time I've ever raced at night. Turns out racing at night is pretty much the shit. Even with tired legs and a worn out body, I was having crazy amounts of fun flossing the trail, and letting the Epic do what it does best.

I feel like this is where I need to put in the Epic plug... I still am amazed at how crazy awesome this bike is. It just takes my riding to a whole nother level, and makes riding and racing so much more enjoyable. Council Bluffs was the perfect mix of trail for the big wheeled dually. Loose fast corners, plenty of little chatter rocks, and fast flats made for a playgound that the Epic and I ate up lap after lap. Most sections could be railed at major high speeds just by pedal kicking twice and staying loose while letting the bike carry high speeds all by itself.

The night lap went well, and minus my horrible spell of bobbles while riding in front of Bob Arnold, I finished fairly well. I still had cramps setting in on the last climb just like every lap before, but I finished strong and came across the line more stoked on life than ever before. It really was a most amazing feeling throwing my bike down for the last time and knowing I had done what I had come to do. My day was done, and with that 1:07 night lap, we had more than enough time for Trav to go our for our 12th lap.

Finishing was a the highest of highs emotional wise for me in a long while. I've been very fortunate to have had a very good season with some great results, but that race was a very up and down race for me and I felt like I raced extremly well for never putting my body through a race like that. The one hour on, two hour off format was new, and between every lap I would feel like death. My stomach was torn up all day, and cramps would rear their dirty head much of the time. But once I bombed down that road, and hit the singletrack all worries faded. The music took over my mood, and the legs did what they do best, push pedals.

As soon as I finished I proceeded to the PBR tent, which was so graciously hosted by our favorite jerks, Team Segal. They not only brought their A game, but they also brought 4 kegs of the delicous PBR goodness. For those of you that were there to witness the aftermath, you know that I had my fair share of that special drank, and was overall enjoying the shit out of the afterparty. I was on cloud nine, and had a blast hearing all the stories from all the cool ass people who I had the luxury of racing with and against all day long. It truely was an epic day, followed by equally awesome evening.

Nothing but amazing things can be said about this event. Top notch scoring meant that you could find out your lap times after every lap. The sweet gal behind the scoring computer would quickly tell you, and never seemed bothered by having to do so. The chip timing is truely where it's at. Mesa Cycles did an excellent job, along with all the volunteers who helped make it possible for us to race our bikes through the woods all day. There were even results posted throughout the day to see where everyone was at.

In the end Burnin lived up to it's expectations. It fullfilled even my wildest dreams, and when all the smoke settled, team Shake 'N' Bake took the top honors in the Wicked Fast class. The belt buckles where ours!!! Shot's team did a most excellent job in making us work for it, and they were nothing short of a very hard team to beat. Consistancy was something they did very well too, along with Shots fastest day and night lap. In the end I was able to hold him to within 30 seconds a lap, to two minutes, which made me happy. 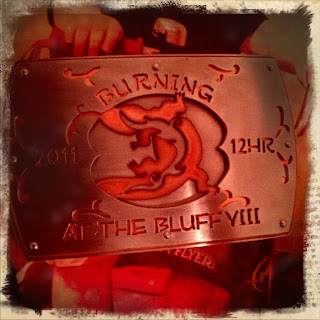 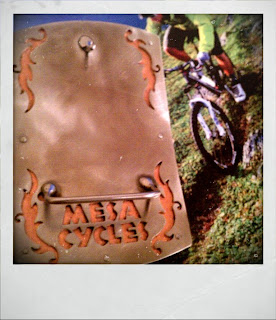 Some sweet machining was done to create these masterpieces.

I'm sure there's some podium pics out there, along with probably a bunch of other crazy shots of my drunken ass. I couldn't help but let loose and have some fun. The season is winding down, and I'm all about having as much fun with my dirt loving friends as possible before we take the break that's known as winter. Burnin will for a long time be a staple in my racing calendar, and of course the dream team will be back next year to defend our buckles.

Because like they say... Winning once isn't the hard part. It's defending it that takes skill.

Skillz shouldn't be hard to find next year, because the stoke o meter will be at an all time high in anticipation for many months leading up to what will be...

G
Posted by Garet Steinmetz AKA G-Wiz at 8:44 PM