Ethos 1... Possibly the lamest name ever. I'm going to have to make sure Trav doesn't get that luxury of team naming next year. But regardless, Ethos 1, which consisted of Travis Donn and myself, took it to the dirt yesterday for the annual Tall Oaks Challenge in Jeff City at a little gem of a trail called Binder Lake.

I cut my teeth riding these trails. Back when I had the Wal-Mart Mongoose, I used to go out from time to time and break things pretty much every ride. Then I got the GT Outpost, and continued to ride very rarely throughout the last few years of school. It wasn't till I graduated, that I decided to take up riding a little more seriously, and bought a Specialized Hardrock from Red Wheel. It was there that my addiction truely started. I rocked Binder daily for that first year. It was a year full of weezing and overall being a out of shape wannabe biker.

This was the 4th year that I've done Tall Oaks. I'm pretty sure I've done it every year since it started. This year was about like every year, with the same trail being used, the same format, but better competition and more racers overall.

There were 31 duo teams that took to the dusty trails. The trail was in major need of some rain, and I'm sure every racer who took to the trail yesterday is hacking up dirt flavored lung bunnies today. On one end you had to watch your speed around corners, but on the other end it was so dusty it always looked like there was a racer just up ahead so you seemingly always had it pinned trying to catch that next racer. I know more than one racer that took it to the earth hard on some of the loose corners. But you know who didn't? THIS GUY! I know right, holy shit, the king of wrecking didn't wreck all day long. That's a record I believe. 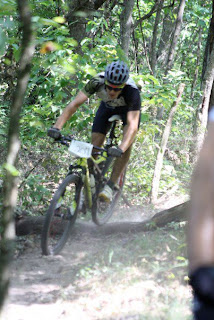 Big thanks to Nicole Stacey for taking pics. Find them here.

Travis comes in with Chris Ploch after lap 1, who was racing with ancient but still fast as hell Bob Arnold. At this moment I realized we had already lost the bet of the day. Bob and Chris bet us a six pack a piece that we couldn't beat them by the difference in our combined age in minutes. Basically Bob and Chris's age together was like 90 something, and Travis and mine was like 50 or some shit. Ok, maybe Bob isn't that old, but it still ended up being a difference of 24 minutes (years) or something. We only took the bet because Chris was trying to play the "I'm hungover" card. Which I'm pretty sure turned out to be crap, as he continued to smash 32 minute laps. Anywho, we lost the bet, but back to the first lap handoff. Bob fumbles in his oldness during the handoff and I get out in front of him. I pin it, and put in the fastest lap of the day at 31:07. I felt like shit the first lap. My legs felt awesome, but my lungs were on fire. I have a few ideas why, mainly sleeping in a dungeon the night before. I was shooting for a sub 30 minute lap, but it eluded me again. 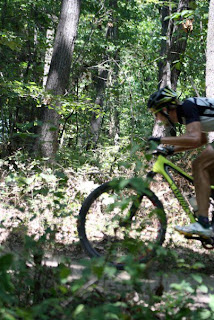 We have about a 3 minute lead on now 2nd place, Devin Clark and Rock Wamsley. There are close to 6 teams all within minutes of each other. These teams included pairs like Jeff Yeilding and Mark Gullet, JP Brocket and the Manimal, Andy Gibbs and Andrew Moorman, and Bryce Hylton and Corey Case. 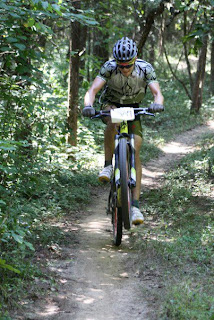 Long story short, Travis continued to put down fast laps, and I did the same. My second lap was 32:02 and I felt like I was working 20% less than lap 1. Looking back I should have pinned it that lap and I probably could have hit that sub 30, but I still had 4 laps and I wasn't looking to loose it for us. So I rode fast but comfortably. Lap 3 for me was 32:35, lap 4 was 33:05, and my last lap was 34:49. I was feeling rough on the last lap, but overall I felt pretty great all day. My legs did what they were supposed to do, and that was crush the pedals for a total of 5 - 7 mile laps. A rough calculation shows I averaged about 12.8 mph overall. That's about what I need for the BT, and I'm figuring it's a fairly comparable course. Now I just have to string all of those laps together back to back, plus add about 3 more. 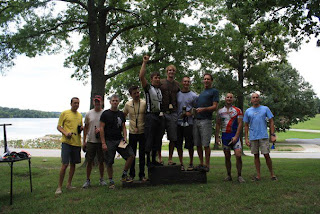 In the end they didn't recognize the fastest lap. That's a first. Apparently they didn't have time according to Nick. Travis also said he had 50 bucks more in his envelope than mine. Guess I caught that short end of the stick. No worries... Still gotta give a shout out to Nick and Jessica, all their fine volunteers, and Team Red Wheel for hosting this always sweet ass event.

All in all, it was great riding against some fast dudes with lots of friends to hang with in between laps. Free PBR from the coolest dudes in black, and a frog leg fry immediately following at Pops. Strike it as a mark in the good day column.

Headed down South this weekend for the Slaughter Pen Jam. I'm ready to jam.

Posted by Garet Steinmetz AKA G-Wiz at 8:16 PM