Not often do I feel like racing in the mud. Something about trashing the bike, and trashing the trails doesn't sit well with me. But... there are those times when I make exceptions, and yesterday was one of those days. I had a SS I didn't mind trashing, and the trails at Rhett's are used to wet abuse.

I built up the Stumpjumper 29er I've had sitting in my living room for the last few months late Saturday afternoon. After a quick stop in to the bike store, I had everything I needed. Well, as it always goes with doing shit last minute, I ran into minor problems. Mostly the tensioner I was going to use to run it SS was broke, but luck would strike in the form of a 32x18 magic gear. Basically that means that that specific gear was perfect to run without a tensioner, and the chain was nice and taught. The new Hive BB went on nicely, and the crank fit like a charm (which wasn't the case when I original went to build it.) That's part of the reason it's been sitting for the last few months. You might remember a picture I took back after one of our Arkansas trips, when I snapped the rear triangle of the original Stumpy. 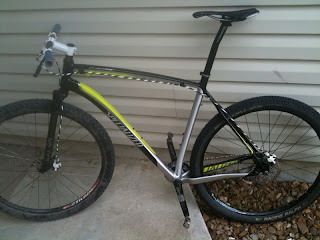 So off to Rhetts Sunday morning with Travis, misting and looking like rain the whole way. We show up and do a pre-lap, joined by Justin Farmer, and I immediately think it's going to suck. It was slick, muddy, and the I wasn't feeling worth a shit after two hard days of back to back training Friday and Saturday. Luckily, towards the end of the lap the legs loosend up a bit, and I started getting my mud skillz back.

We lined up with a few of the Lou crew, Aaron Elwell, Dan Miller, and a handful of other experts. 5,4,3,2,1, we're off and Travis takes off to lead just like he so loudly announced he would before we started. The beginning was hectic for me. I couldn't get going, and found myself 6th wheel or so.

After that hill I was 4th sitting behind Travis, with Aaron and Dan about 20 seconds in front of us. Coming though the start/finish I pinned it a bit to try to catch them, and Travis decided not to chase. I spent that lap pretty much solo in between Trav and just a bit off of Dan. 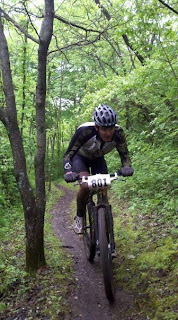 Coming into lap 3, I was only a bit behind Dan, and in somewhere in that lap, I caught on to his wheel. He endoed something pretty amazing coming into the FU hill, which put me in the lead.

Coming into lap 4 I had Dan right on my wheel, and figured it was time to strategize a bit. There was a rocky uphill, followed by a quick downhill, and another rocky uphill not long after the soupy powerline section. I had held Dan off through that said soupy powerline section, and figured that hill would be where I would make my attack. It was one of those hills I made only half the time, because if you didn't play it just right, you would slid on the big rock and have to run it. Well, I played my card perfectly, and made it up as clean as ever and followed it up with a quick ascent of the following hill only to look back and see Dan right on my heels. That didn't work so well.

I figured at that point it would come to a sprint finish only as long as I could hold him off till the FU hill and lead coming into it. I hate to block, but it's a race, he had gears and I didn't, so block would be what I was after. Well on another big hill, I lost traction, and he slipped by. He gapped, and I had to put in another dig to catch back up. Catch back up I did, and I was riding his wheel right up to the FU hill. This is were he made the play of the day. All be damned if he didn't clean the first section like he was completly fresh. I surrendered defeat. There was no catching him at that point. He had 30 seconds in that short period and I had to walk the whole damn hill. That was the 4th time up it, and I was all but done with it at that point. 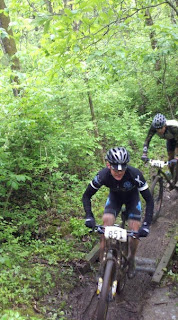 Cruise control to the end, and a 3rd overall. I was happy with it. Travis came in a minute behind me, I was 30 seconds or so off of Dan, and exactly 3 minutes off Aaron. He pretty much checked out for the day and showed us how it was done.

To bad I was the only 19-29 expert. That's twice now. Unfortnately my main competition for the year in my age group, (if I can even be called competition), is Shottler, and he was out with a broken wrists. He was however out there bouncing all over the course cheering and heckling us on. He was also the one who took those sweet pics.

Aaron made a mention over on his blog about doing the payout for the overall. I'm all for it. They did it in Nebraska, and it seems to work out fine. Pay out the top 5 overall. You can still use the age groups for points, and USAC classification, but lump the payout in the overall. I think that would draw more racers to the races from all over. The top guys from the region would travel if they knew they could make a little dough to cover the cost. When you can only make 60 bucks max, traveling 2-4 hours to race doesn't seem as appealing. Now I know there's plenty of you that race just for fun, and that's all gravy. I'm no different. But if I'm going to travel, which we do often and sometimes very far, I'd like to know the incentive is there to make my travel expenses back at least.

No racing for me this weekend. I don't think. Wedding to attend. More training. Go. Go. GO.

G
Posted by Garet Steinmetz AKA G-Wiz at 1:00 PM