Great riding at Knob tonight before the monsoon hit. Got the mental course layout for the fat tire race. More details to come but I'm going out on a limb and saying it will be one of the better courses of the year. Fast, fast, fast and flowy with a couple doubletrack climbs and one killer. Some crazy fast downhills, one short tech section and lots of swooping fun turns. Oh ya baby, fat tire heaven.

From me to you via iPhone
Posted by Garet Steinmetz AKA G-Wiz at 8:33 PM No comments:

So I'm convinced. If you can do this shit to a road steed, you can do anything to a plastic mountain ride... Enjoy.

Posted by Garet Steinmetz AKA G-Wiz at 2:24 PM No comments:

Wish I could say Ethos now had a couple, but we were forcefully made to race super strong guys this weekend. All in all it turned out pretty nice.

I was still recouping from the Down and Dirty race the weekend before at Warsaw. Pretty much went like this...

Took the holeshot out of 15 experts, some racer who I won't mention pulled a dick move causing me to wreck doing 20mph into a cedar tree, all the sport and ss class passes, I get up stumble around, get pissed, start raging, work my way back up to 2nd, flat, and end up 6th or so, 1st in the 19-29 only because Justin had two flats for the day. I felt good, but it was just one of those races.

I took the week off, and recovered. Somewhat. Still bruised and beaten a bit.

Friday Travis, Steve, and I headed to the STL for a pre ride of Castlewood. It rained crazy hard for 10 minutes when we showed up. Just enought to slick everything up real nice. The puncture from last weekend that I thought I had sealed came undone, causing me to put a tube in. The opening climb was bonkers, and I eventually opted to run a 34x20 instead of the 19. Figured it would be easier to spin faster instead of grind.

We had 14 Singlespeeders overall. Pretty stoked. Some super stiff comp, including Dan Miller, Dan Furhman, and a national champ Pro, Dejay Birch. Ya I pretty much figured he was going to dominate us all.

We take off, I can't climb for shit, my back wheel falls off at the top of the climb and I'm back off the front by 30 seconds. Pefucked! Manage to work hard and pass Nico from Team Segal and Dan F on the first doubletrack hill. I was raging nicely, and ended up behine Rock Wamsly, who pulled me along the rollercoster section. I noticed that Deejay was up in front and I yelled at Rock to catch "that dude". He did, and we made the pass. I was pretty stoked to be riding in front of a pro at this point. 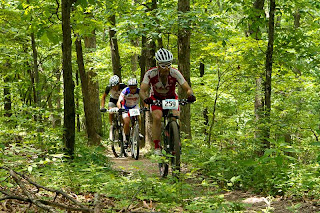 Making the move on some experts.

It was hot. First lap was good, second lap was a little harder, and the third lap I developed a chain problem. I had popped the chain a few times during the race which didnt sound good. Guess it kinked a link, because on the last lap I dropped my chain 5 times. That was disheartning. I just kept thinking, great now Dan and Deejay are going to catch me. Well I rode like a bat out of hell on rollercoaster to make sure I gave myself extra time on the Grop hill. I noticed Dan F coming up on the last hill and buried myself. Then my chain came off again. I don't know how I held him off but I did. Came in 2nd. 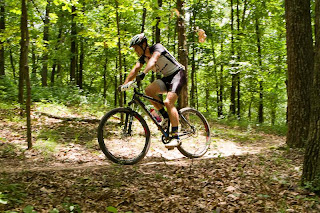 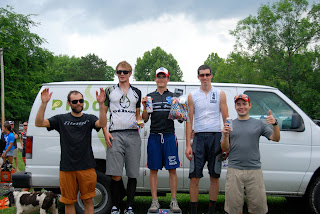 Not to bad though, I was happy with it all. I didn't have my climbing legs, which I normally do. Had I had, and had I not had dropped my chain 5 times, I might have been a threat to Dan Miller. As it was though, he beat me by 4 minutes. Super strong charger this year. Glad to see a good dude win it...

So ya, I guess I'm pretty much pro now. I mean Deejay is more of an endurance racer but a pros a pro. I don't think anyone thought we were taking him down, but three of us did. Both Dans and me. Guess Deejay wasn't used to the retarded high humidity we have here in Missery. It was crazy hot. Deejay was a cool dude though, definetly happy to have raced with him.

Travis had the stacked field of the day, he ended up 7th overall, and 6th in his class. Schottler won it. He's absolutely killing it right now. Steve had to pull due to the heat, along with a ton of other people. I don't really mind it, I can deal with it I guess.

Next up is Perry Lake, this Sunday. From the description, it sounds like a good course. Should be good for another 34x20 expert slaying session. I've been enjoying racing Expert on my SS this year. It's challenging, but rewarding. Knowing that I do what they do with one gear and do it just as well. Who knows, I may be a SS convict forever... RIP gears.

G
Posted by Garet Steinmetz AKA G-Wiz at 10:22 AM No comments:

I've been busy... To busy for my taste but what can you do. If I had it my way, I'd be laid back, sippin a 40 in the shade while listening to Snoop Dogg beat outta my boom box. That's a warm sunny day for ya. Instead I've been working go go go, and fitting in good rides here and there.

I forgot to post up about the Krug race, but you can find out how that went by clickin on that pretty Ethos logo over there ----- >

Bottom line was it was a bad ass race, and brutal to boot.

Then it was taking it easy for a couple of weekends. That was nice. No racing.

Last weekend Jamie and I did a little ride on the Katy while the Peddlars Jamboree was going on. That was nice. Jamie did awesome, busting out a 30 mile ride off the couch on her Walmart bike. I was impressed. She only complained a bit, mainly about her bum, but my bum hurt too so I can only imagine her's on that shit ass saddle.

Then Kev and I went out for a hot 45 mile gravel grinder the next day. I got a glove tan line. It's pretty sweet. Kevin got to experienc REAL gravel, none of that buff pussy shit. The kind that's hard to ride through and makes keeping it upright downright hard sometimes. It puts the pain on you, and hopefully the DK gravel is a little nicer to him.

Tuesday I took out to Warsaw to do some preriding so that I can give you, the loyal reader, a preview of the upcoming race this weekend. Prepare for fast, chattery, rocky, fun. I recommend a dually or lower tire pressure. It's a bad ass trail system, but jesus, it'll beat the hell out of you. No real big rocks, just a million billion small ones. Either way it's going to be a throw down. Mac even made an eleveated TT shoot to start the TT on Saturday. It was impressive. This cat puts on one hellava race, so I recommend you come down fool.

Last night I did the Spin Pizza ride up at Waldo with Trav and Jamie and some other people, one of which included a douchy wannabe who thought he was cool. That's besides the point. It was a good ride, something like 24.5 average on the main section. Pretty chill going out to the hammer grounds, and coming back, but for that 18 mile stretch, it was on. We almost got killed. Some jackass in an old hoopdy came flying around a corner, did a 180 hit a car on the oncoming lane and then sped off. What a dick. Luckily we were 30 seconds to late, and he passed us before failing the corner. The pizza at Spin Pizza is amazing... Well I didn't really eat it but I've heard so. Either way this Wednesday night ride is a must do. 30 miles and it leaves at 6:15.

So there you go homie, the almost bi-weekly G-Wiz update. Hope to see you this weekend... Find the dirt here.

Also, recieved my ultrabadass Kuat NV rack a few weeks ago. I'll post up about how amazing it is soon. Let's just say it pretty much makes any other rack look like childs play. It's legit, to legit to quit.

G
Posted by Garet Steinmetz AKA G-Wiz at 10:34 AM No comments: