So I like blues... and one program our station does carry is the House of Blues Show. It's a staple for the ride to Sunday races. I caught this song on it the other day. It was aurally pleasing, not to be confused with this orally pleasing.


So lets start with the first order of biznatch which was our Key Largo vacation. BA I tell ya, BA. I try to be hip to the latest lingo, kinda like FML. No need for FML here, mines been gravy.

Jamie and I spent the week down in the Keys with my family, which turned out to be more than we wanted sometimes, but overall an awesome time. 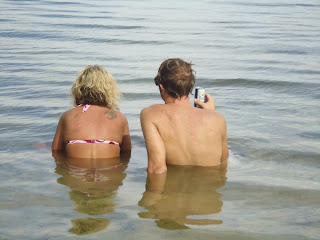 I caught like a hundred of these fella's. Was hoping for Moby, but that dick never showed. 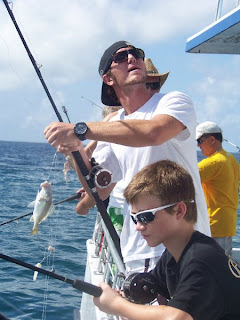 This was our bounty. 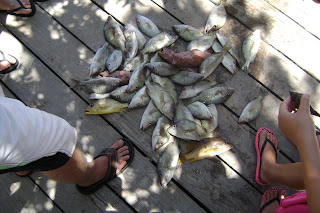 Got to Scuba Dive but no pictures, all I can say is AMAZING! Unlimited visiablilty, and I caught my first lobster, and even spotted this bad boy. I take claim to finding him, but I let the others work their magic on catching him. 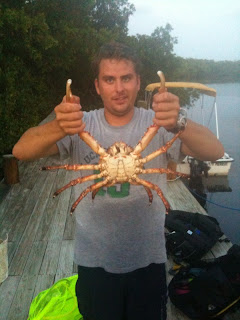 I went with my cuz Josh, whos a marine biologist down there. Apparently he has the best job in the world. He just dives and studies weird sea life all day. Hard life I tell ya. They wanted to measure and study that bad boy of a specimen, and said it's the largest they ever caught. I don't do anything but big...

Lots of other fun shit, and then finished it off with the last day down at Key West where Jamie and I proceeded to see how many different bars we could hit in our 4 hour time frame. I was wasted...

So that was fun, much needed time off. A whole week without a bike! I thought about jacking some people as they rode by, but my better moral judgement told me I'd like to make it back to Missery, although the thought of a Key's jail sounded somewhat not so bad.

Came back, felt great on the bike, and then BAM! Head cold... I love that shit. Always before a race you actually give a shit on how you do. The Midwest SS Championship. I was ready for complete domination, but the few days leading up to the race were sketchy. Still had a clogged up head and not so good looking bowle movements. Ya, sick.

Long story short, 3rd of 67 total SS'ers. Worst race of the year for me feelings wise. I had no zip, and really had doubts on finishing. It's hard to stop when your top 3 though, and even through the blurry double vision, lack of being able to breath, and overall feeling of about to pass outness, I made it through the 3 laps. 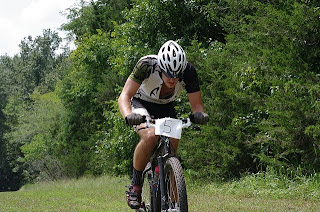 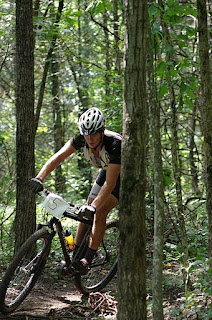 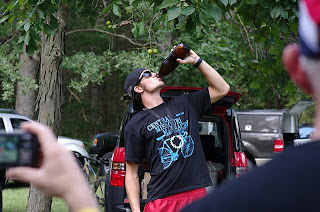 Trying to dominate the BEAST! I was going to chug that shit but it's so damn nasty.

I would have loved to been on game, because Breslin was there and I think we could have rode each other into the ground. I had a decent start, gapped the feild and then just couldn't recover.

Oh well, still a decent result, just not what you want. I don't mind losing sometimes, but when you have others slotting you in top spot and you fail, it sucks. When you have yourself slotted in the top spot and fail, it sucks even more. And lastely when you get beat by a 19 year old who's new to riding, it puts the nail in the coffin. Turbo as your called, nice job man, keep it up...

I will revenge my lackluster showing. One thing I did learn was throwing down sub 33 minute laps should be easily doable at the Binder 6 hour race. My first lap was a 33, and I felt like crap on over half of it. Had I performed like I did at Sunflower and Croc Rock, I could have easily busted sub 32.

Off this weekend, I'm passing on Cruise the Blues, although you shouldn't. It's truely a spectacular race. I just have to much crap to get done around here. Being a responsible adult sucks. I just want to be a kid again...

G
Posted by Garet Steinmetz AKA G-Wiz at 12:48 PM No comments:

Musically I haven't posted much as of late. Mainly because nothing has excited me music wise. I haven't found any great gems lately. For the most part music sucks now days. Maybe that's just my thoughts, but great songs are a hard to come by, and great bands are even harder. For sake of you reading this I'll give you one of my old favorites....

Don't judge me... Just put that shit on loud and rail some trails.

I've been feeling good as of late. I'm about to make Saturday weddings before Sunday races mandentory. I've had good luck these last couple of weeks.

Yesterday was Croc Rock up at Perry Lake put on by Lyle Reidy and some other fine folks. I've got to say they did a fine job. Nice trail, full of rocks, some ruts, fast fast fast flats, river trail, sketch creek crossings, and high speed gravel turns. That's pretty much a recipe for fun in my books. Kev, Amy and I headed up to do some damage and try to ride our legs into the ground.

They started us out with the 19-29 group and 30-39 group going at the same time with the rest of the experts going off a minute later.

I managed to flat during the pre-lap, and then found out my tube had a cut in it. Thanks to some good friends I was able patch it and get some spare tubes. With changing the flat, and fixing my loose chain, I managed to get to the front line with only minutes before the start.

I took the holeshot which seems to be the norm. I figured it wouldn't last long with Kent McNeile and Aaron E behind. It lasted for a couple of miles, then Kent passed, followed by Kevin L, both from Trek Omaha, and then Aaron. Not long after, Kent flatted followed by Aaron. It was just Kevin and I at that point.

I kept him at a 5 second gap leading into the 3rd of fourth lap, but fumbled on my bottle switch which gave him a little bigger gap. The 3rd lap was a blurry death lap for me. The rocks were killing me on my non-suspension bike, and it was everything I could do to keep a good pace. My back was about toast, and my hands felt like they had been beaten with a meat tendorizer. I lost sight of Kevin about mid-way through the lap.

Some goo and the last lap boost got me going again, along with alot of telling myself to quit being a pussy and that pain is just an imaginary crock of shit. The last lap was good, but I did get passed on the last damn hill by some other Trek Omaha guy. I tried to sprint him to the line, but my legs weren't having it. Turns out his was in the master end of the experts, and started a minute later anyways.

I beat Aaron, which was funny, because last week I told him I had his number. Pure luck, pure luck...