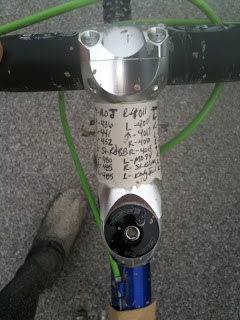 Posted by Garet Steinmetz AKA G-Wiz at 11:33 AM No comments: 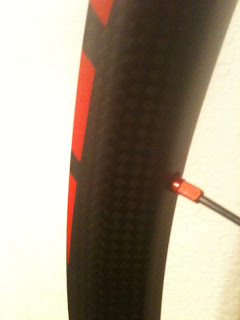 Posted by Garet Steinmetz AKA G-Wiz at 7:18 PM No comments: 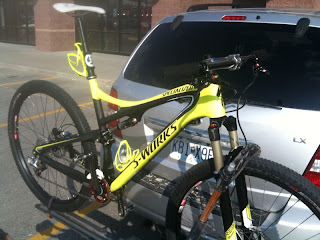 Posted by Garet Steinmetz AKA G-Wiz at 2:47 PM 2 comments: 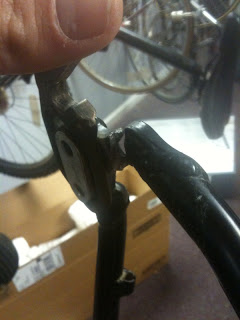 I have a new 2011 black/flowyellow Stumpy frame that will be joining the Epic.

You will see amazing soon...

G
Posted by Garet Steinmetz AKA G-Wiz at 12:31 PM No comments:

First Race of the Year

And it's a win. Wiener wiener chicken dinner.

Wanted to ride trails and I knew Mac was putting on a low key race down in Warsaw. He has a little series going to help promote first timer and beginner racing.

Now wait... Before you talk shit, there was also an Open class. It was a short course, 12-13 miles, which was perfect for doing a test of my race fitness right now.

I really didn't expect any hard hitters, but I was happy to see Mark Gullet before the race. He had a great season last year, and always mixed it up in the front of the Expert class. He whooped up on me a few times for sure.

The new steed was still in the build process, but luckily I have boys like Kevin to rely on. He let me borrow his SS Stumpy to race. Nice set up... I9's, Fox F29, and tubeless!

That last part was nice, considering I've flatted almost every race at Warsaw. Those races always make for rough goings. Pretty much the rockiest around.

The tire was an armadillo Speshy Captain. Never ridden them, but I could tell they were beefy and so I made no haste in sending them hard through the rocks.

I've had about 12 hours on two seperate mountain bikes that weren't mine in the last week. The Xcal in Arkansas, and now a couple on Kevs. My back doesn't like new bikes. It always takes time to get them set up properly.

I got down to Warsaw about 8, suited up and put in about an hour one the trail to get used to the bike and get some trail riding in. Trails were good, soft in a few spots, but 90% good. I had to raise the seat twice in my pre-ride, an after an hour my back was throwing fits. I made one more adjustment before the race, which put it about spot on giving me the power I needed without wrenching the back.

There was a good show up overall, which suprised me given it was just over freezing when we started. I figured that would keep most people home. I think everyone there was in like thinking, we all wanted to support Mac and his trails. Mac said they have close to 20 miles of trail now. Awesome...

So at the start, I told Mark to take the lead, because it was a wide open start. His bike is ridiculous. He showed me his new seat and seatpost which weighs less than my seat combined. He said he has it down to 19 pounds. Crazy... I pretty much figured I'd let him lead and take it from there. You can only spin a 32x18 so fast.

He lead for the first mile and then had a chain bobble on a steep switchback. It was go time...

Hammer down, I put in a quick 30 second gap and pinned it. My lungs were on fire. I'm hoping it was the cold weather. I was breathing like crazy.

The race went without a hitch. I was confident in the tires and I could handle the bike fine.

I felt good, and only got bogged down a couple times on some of the longer hills. I kept it pinned because I knew somewhere not far behind was Mark. Legs felt good, and the lungs came back around about halfway through. The back side was crazy rocky, but the Fox fork ate up alot of the chatter.

I came in at and hour and five minutes, with Mark three minutes behind that. Third was twenty minutes back. Like I said, Mark was my competition.

The BBQ after was great, and the campfire was not only great after, but amazing before the race. It really helped to keep the legs warm.

Mac did an excellent job as always, and I was happy to support his efforts.

First race down, many more to come...

G
Posted by Garet Steinmetz AKA G-Wiz at 5:33 PM No comments:

I think I could make millions off this shit. It's worked like a charm for me. I'm down 25 pounds from the holidays. I like to induldge. But I've been better.

So without further or do, here's my magic pill.

Work out. Then work out some more. Then work hard. Even harder your fat piece of shit.

Eat right. That means NO fast food... Your not that damn busy. Bring your lunch, it's faster anyways. Lots of veggies, tons of fruit. A blender and juicer ate your best friend.

Drink less beer. It's okay alchy, you don't have to go completly sans boulevard, but just keep that shit to a minimal. Like once a week, 3-4.

There you go. I think I need an infomercial. I'm always amazed at fad diets. Really? Are you that fucking desperate and lazy you can't take 30 minutes a day to do some actual physical activity, and stop stuffing your face with ho-hos? I think more than anything, the fact these pitchmen get rich selling that stuff pisses me off the most. Who knows maybe it works, but I sure do hear alot of fail stories.

I know my plan works.

Posted by Garet Steinmetz AKA G-Wiz at 6:44 AM 1 comment:

It's feels like the movie Frankenstein. Just waiting for the strike of lightning. Oh the call in my case. No hurries, don't need it yet. Trails are junk and I think I'm going to race Kev's Stumpy at the low key Warsaw race this weekend. I just feel like riding trail, and I always like supporting Mac and his efforts.

As for our Arkansas trip... Well I'm still a bit sore. Ya, we rode that much. Legs feel great, it's my butt that's still giving me grief. I think I didn't have that xcal set up just right. 3 days, 12 hours, and I'm pretty sure we climbed one million feet. Or 10,000, but at times it felt like a million.

Here's to hoping the rain is kind...

Posted by Garet Steinmetz AKA G-Wiz at 10:23 AM No comments: