Trav and I seem to make a pretty good team when it comes to some Duo dirt action. This race was no different.

I really wasn't that excited about this race. Not sure why, just wasn't. I was coming off of a weird spell of dead legs, and put a pretty good week in of full on intensity. Between Monday's trainer ride, Tuesday nights crit, hot laps at Knob on Thursday night, and Friday early AM intervals, I was pretty cooked. Luckily the legs came back around and were ready by Sunday morning.

Met up with my boy, and winner of the Clydsdale 6 Hour race, Kevin, and we headed to Lawrence for the 3rd running year of Bone Bender. The fist year sucked, last year was much better, and this year was pretty sweet too.

Travis and I duoed it up as mentioned, and after some convincing, he took the first lap which includes the always dreaded LeMans start. I don't know why they do that. Pretty dumb in my book, a rolling neutral start followed by a random gun shot would do much better. No one ever seems to like running to their bikes.

Anyways, Travis had a decent first lap, but apparently had to nurse a flat tire. Shottler had the lead, (doing 6 solo), followed by an Iowian (3 solo), then Travis, with Chris Ploch hot on his heels. I didn't even know Ploch was there, much less doing the duo. I meet his partner about 10 seconds before we hit the road for our first lap. Dan I believe was his name.

Dan quickly sucked my wheel like a seed tick as I pulled us up the pavement, and through the field before hitting single track. I was actually a little worried I was going to have a battle on my hands. Not that I don't like battles, but I don't care for having someone sucking my wheel. Don't get me wrong, he was doing what I would do too, but I just don't ride well with someone on my wheel. On the first tech uphill burst, I got twisted up, and actually twisted my bars sideways. Awesome... A great way to start. I stopped, and luckily they straightend out fairly easy. Dan got by, but it wasn't long and I made my way past him. Then came the first real rocky uphill, and I pinned it from there. Looked back after a few minutes of huffing, and Dan was no where to be seen. Alrighty then... 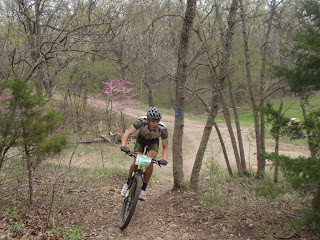 Thanks to my boy at ClassyKC for the pic...

First lap felt like a XC race. I was redlined pretty much the whole time, and my goal was to catch Shot and the other dude. I caught up the the 3 hour dude fairly quickly, and then Shot not long after that. He had to stop to seal a flat, so it was me up front from there on. My back was killing me towards the end of the first lap, and I thought the lap would never end. I still put in a decent time at 44:14.

Trav put in a smoking 3rd lap, his 2nd. Apparently it was a 38, even though they had it scored as a 47. Plochs wifie did however confirm it, so I guess it was legit. I'm still a skeptic, as that would be stupid fast, and I felt like my first two laps were fast as it was.

My second lap, our 4th, was good. I got in a groove, and even though I wasn't gassed near as much, I put in another 44 minute lap. Back was much better, after some good stretching post lap 1. Trav put in another clean lap, my 3rd was 47 minutes, and Trav finished his 4th without any other issues. I wasn't looking forward to that 4th lap, but went out knowing all I had to do was finish clean. At that point we had about 20 minutes up on Ploch and Dan, so I pretty much put the cruise control on and quickly soft pedaled my way through it. 49 minutes was the final lap time. 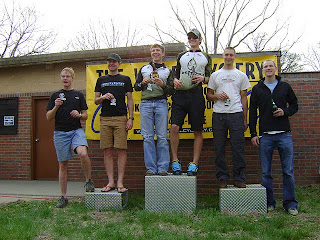 Course was awesome, and I think my pre race non-motivation came from me wondering just how good they said the trail actually was after Thursday and Fridays rain gushers. After hitting the trail, I quickly changed my tune, and enjoyed the shit out of riding all day. My legs finally felt like they had come back around... 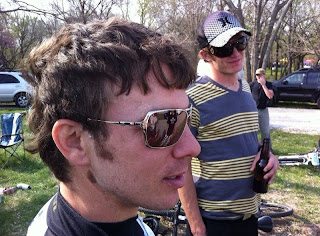 The after race story telling.

One more week of training hard before resting up and getting ready for Mellow Johnny's. Here's to that....