I dig the Chigger Digger. It's always one of my favorite races of the year. I'm not sure if it's because it's my backyard trail, the fact that I can wake up an hour and a half before I have to race, or if it's the awesome trail that makes it so great. Either way, this years Chigger Digger will go down in the books as another great time. Seems that everyone else had a very similiar experience too, which is always a plus.

I got to the race about 10:45. A little later than I had planned, because part of me was still on the fence on whether to race Marathon in prep for the BT, or just race Expert and do some extra lap. My decision was made while filling out the forms at registration. There were something like 8 marathoners versus the probably, maybe, if I got lucky one other Expert that might have showed. Race Marathon it was.

I've never got ready for a race so quickly, and I've never started a race with no warm up like that. I changed with the quickness, checked my air in the tires, filled up a flask halfway with hammergel, and filled up my only two bottles with two scoops of EFS in both. That would be my nutrition for the day. Thankfully one of my friends from FreeRide Bike Shop was there to refill my bottles with fresh water. That was a major time saver. No new EFS, just the four total scoops, but fresh water was welcome towards the back half of the race.

Just a short 20 minutes from arriving and Barry shouts go and we're off. I decided to warm up properly by not easing into it, but by instead hammering it right off the line. I wanted to put in a gap and get out of sight. Which almost worked... I'm kinda glad it didn't. Racing is much funner when you have someone on your wheel. A quick look behind me had me seeing only one soul willing to play along with my XC pace to start the 3 hour race. That guy was Cale McAninch. I knew at the start line that he would be one to beat. Super strong rider, which showed as he and I crossed the Start/Finish together after the first lap with a time of 30 minutes.

I let him lead out lap 2, wanting to see how he faired leading. He was hammering the fast sections, but slowed down a bit on the hills. I'm running a 1x10 with a 36 front ring, and 12-36 on the rear. I can only go so slow so on the second big hill, of four per lap, I took back the lead and pushed hard. Halfway through the white section, I hear Cale say some bad words and figured he flatted in the rocks. Turns out that was the case.

I finished lap 2 solo, along with lap 3, 4, 5, and 6. I've never accomplished 6 laps at Knob, let along back to back non-stop. I was very pleased with my form. I had excellent power the whole race on the fast stuff, and managed to play damage control on the major hills on the last few laps. All in all there were 24 good climbs in this race, with plenty of little inclines thrown in between. On lap 4 I started counting down the hills... 12, 11, 10, ect...

My motivation stayed fairly high, although on the last lap my back and shoulders really started to bitch at me. I had decided to incorporate my core/back/upper body workout into my training again on Saturday. I had a slight hiatus from it for a few weeks. It definently didn't help for Sunday, but I managed. I had a little nagging back pain that came and went, but other than that I stayed on the gas and finished my 6 laps, roughly 40 miles in 3 hours and 16 minutes. 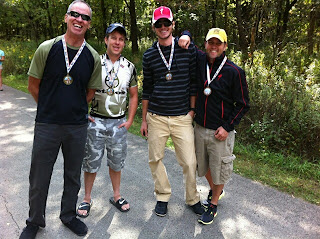 I'm feeling really good about the BT now. Yesterday was a huge accomplishment in my books. I've never really been a great endurance racer, and most likely won't anytime soon. But yesterday I proved to myself that I can ride hard again for 3+ hours. I haven't been able to do that for a few years now. Being so XC oriented, I never really train long or race long. I've done Syllamo, Ouchita, BT, and a handfull of other solo 6 hour races, but never did great at them. The BT is perfect in my book. Under 4 and a half hours is right in between XC and Endurance.

Two more BIG weeks of training, and then some taper action. Still a ton of great racing left on dirt. Hopefully I'll get down to do the River Front MTB race this weekend. More on that to come...