I Wasn't Ready for That

Sometimes in life you underestimate things. You don't really think things through only to find yourself knee deep in shit with no way out other than digging your self out one handfull of crap at a time.

That's pretty much been life for me lately. I'm in the mists of a comeback at work after losing a more than normal part of my business. You see in sales, alls it takes is a couple of big ones to bring you up, or down in my case.

A few months of coasting cost me big time.

Yesterday's cross race was pretty much the same way. I've been putting off training for cross due to a lack of motivation, and the fact that I've been having so much fun riding trails and gravel. We haven't had a fall this great in I don't know how long.

I decided to race the Open race yesterday. I figured I could at least mid pack it no problem. I was actually going to do the SS race before hand, but a nice wreck earlier in the week caused me to have a cross bike that was unrideable.

So I borrowed Kevins Specialized Carbon Crux. It was pretty much amazing. I got to spend a little over two and a half hours on it yesterday, ranging from riding ovals on the practice course, to racing it on a bumpy shitty cross course, and then spent an hour on it at the River Trails in Lawrence. Let me tell you, this bike is amazing all around. It did everything very well. The Specialized Captain tires proved to be great on the river trails and I was able to really push the bike hard into the corners while holding speed. No doubt I'll be buying one next year to race and ride on. Thanks to my boy Kev for hooking it up.

The race went pretty much like this. Start out strong, battle it out for a lap, and then hit the mud on the second lap and start my downward spiral from there. I'm happy we have people like Roger promoting races, but I really didn't care for his course. Thanks Roger, but that mud pit was ridiculous, the course was lacking fun, and it was tailored for the roadies no doubt. Not what I like in cross.

I lost a spot or two every lap after the mud pit. I really hate running. I hate running even more when it's through mud. No reason for that really. A couple of barriers would have done just fine.

I don't know where I finished but I do know it wasn't last. That's good at least.

So back to last week's wreck. All I have to say is my carbon front wheel is a hoss! Take a look at my wheel after the impact. This is the only sustained injury to it. 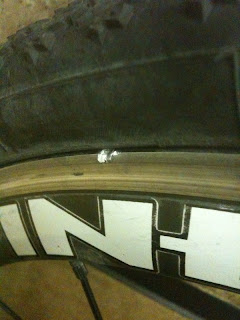 So here's what happend. I'm in KC riding with Trav and Steve. We're in some park I've never been to before and it's dark. We're doing two minute free style cross intervals. I'm leading. I run up a hill, jump back on, and heading back down the hill, watching closely as to not hit my head on an overhanging branch. I don't see a rock wall mid way down the hill. The rock wall has a 6 inch rock lip on it, followed by a three foot plus drop to a concrete path. Do the math, I'm 6'3, so from where I'm perched on my bike to the ground was about 8 feet. I went over the bars and fell that 8 feet to the ground. I ducked and rolled. I was saved by my guardian angel. Really, there's was a very high chance that wreck could have ended in me being in the hospital. I ended up with a scratch on my thigh, that's it. Well, and a bent fork and possibly a trashed frame, but that's a small price to pay for having my life.

We take for granted how lucky we can be as cyclists sometimes. Had not everything went perfectly right on that crash I could have ended up much much worse. Thank whomever you have to thank for your good fortunes sometimes. I know for the most part I end up really lucky in situations like that.

I'm pretty sure a fork isn't supposed to look like that. 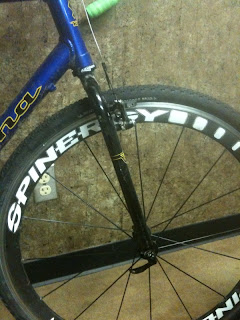 Riding gravel with a 25 mph cross head wind. I needed a break. It's kinda wide open out here... 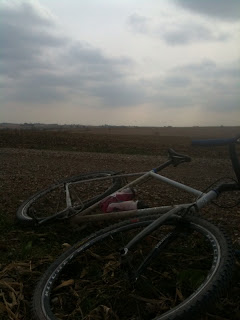 G
Posted by Garet Steinmetz AKA G-Wiz at 10:32 AM No comments: