My old familiar friend.  I'm a happy camper now that the XC scene is back at it and getting ready to take off like a rocket ship.  It's all finally kicked off last weekend with the first test of the season, Mellow Johnny's Classic down in Dripping Springs, Texas.  To say I was happy to escape this snow laddend hell hole for a few days was an understatement.  I couldn't wait to hit sunny skys, warmer temps, and most of all dry trail.

Well I got to hit dry trail, and hit it I did quickly.  Within 10 minutes of starting the pre-ride on Friday the day before the race, I had hit the ground.  Hard.  It was loosey goosey down there, and it always seems to eat my lunch at first.  I continued to ride like a newb, totally 4 hard wrecks in the first 6 mile lap.  It was pretty ridiculous, and I was pretty beat up.  A few more pounds in the fork, a few less in the tires, and a couple of clicks on the rebound and I finally had it dialed in.  Not after some damage though, but luckily it wasn't as bad as it could have been.

Saturday morning rolls around and I'm getting that familiar jitter.  It's the first race of the season, the first test, and I was doing it against 62 pro riders.  I knew my form was good, just didn't know how good or how it would stack against the other boys, most of who are smart enough to train the winters in warmer climates.  Some even had a full winter of XC racing down south, and even more with a full season of CX in their legs.  Me, I had base and one block of intensity to work off.

Guns goes off, and there's a wreck.  I miss it.  I'm good I thought, perfect start.  Then BAM! The dust was so heavy that seeing was difficult and in the mist of trying to catch the inside fast line I hit it a bit to the left which tossed me into the only washout on the road, and over the bars.  Saddles was popped sideways, so I cranked on it only to have it go too far the other way.  Back and forth, back and forth.  Finally I get it straight, but not before the damage was done.

There's alot that goes through one's mind when you find yourself in that position.  Mainly you wonder how you fucked it up so badly.  Then you freak out, and then you slap yourself in the face and tell yourself to man up and do what you've got to do.  Unfortunately doing what needs to be done isn't a meager task.  It involves passing mass groups of dudes who don't like to get passed. 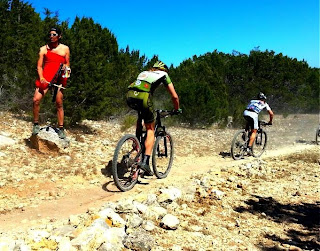 Lap 1 was good, I made up a ton of ground.  I didn't count but it was 20+ guys I passed or so. Lap 2 I ended up gaining another 7 spots, and found myself racing some fairly legit dudes.  Lap 3 I barely survived and ended up flat, no passing, no being passed.  Lap 4 and 5 were hell. 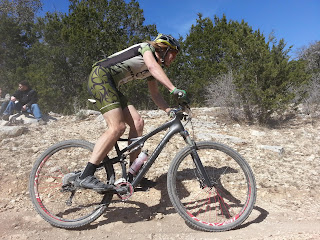 I started cramping towards the end of lap 2.  Lots of reason's I reckon played into why it happend.  The wrecks from the prior day, slamming my knee into the stem at the start, 70 degree dry weather, the high intensity.  No need for excuses, but it was what it was and it was bad.  I straight legged two climbs, the last one being close to 5 minutes of pure stopped time.  I couldn't stand up, and I couldn't get on my bike.  It took alot to get going again, but they finally unlocked and I limped my way to the finish.

I was officially the second to last to finish on the last lap.  So in one token I finished the full race, in another I did it slowly.  I'm not worried a bit though, I had the speed, now it's just extending it.

I have to give a big thanks to JP and Doug for the company going down, Doug and Dara for housing us while we were down there, Ethos for stepping up and helping me do some serious racing this year, and of course everyone else who continues to give me the encouragement to keep it going strong.  It's happening this year, the year of getting fast and breaking that elusive top 20.

There's a ton of racing come up... Here just the next two months.

Guess that means the Stumpy SS will be hanging around a bit longer....

See you out there.

G
Posted by Garet Steinmetz AKA G-Wiz at 4:02 PM